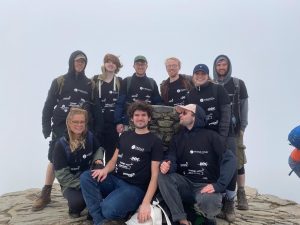 The central support team for Evolve Care Group, Bristol have raised £1500 climbing the tallest peak in England and Wales in aid of Alzheimer’s awareness.

The team who are a part of the Evolve Care Group, based in Bristol, also support 6 other care and nursing homes across the south west. They have raised awareness and collected donations for the Alzheimer’s Society for World Alzheimer’s Month.

Alzheimer’s is a disease that has touched many of the Evolve family and the whole team were delighted to be able to pledge themselves to this important cause. The Alzheimer’s Society estimate that there are over 850,000 currently living with a dementia in the UK.

Josh De Witt, a member of the central support team at Evolve, shared why supporting the Alzheimer’s Society had resonated so strongly within the climbing group.

The team left Bristol at 6.30am on Saturday morning and travelled for 5 hours to reach the beautiful Snowdonia National Park. Despite the group having a real range of abilities and walking experience, it took the group just under three hours to reach the peak, where the team celebrated with a glass of bubbly to mark the occasion.

“I don’t think it was easy for anyone by any stretch of the imagination, there were times we really came together to support each other through the tougher moments of the climb. We were all so proud that it was a challenge we could overcome collectively,” said climber Josh.

Evolve Care Group were joined in partnership in the climb by Challenge Alarms, Safe Working Lifts, Gompels, Savona, DCC Dolphin and Bidfood, whose generosity and goodwill supported the group throughout.

“We want to say a huge wholehearted thank you to our sponsors who have generously supported our cause and have become a partner in our climb, we are delighted they could join us for our journey in raising awareness and donations for Alzheimer’s Society,” Josh said.

The group undertook the trek for World Alzheimer’s Month this September and although the team have reached their target, you can still donate to the Alzheimer’s Society by the page https://www.justgiving.com/fundraising/evolve-care-group-snowdon.