Neurologist, Sir Ludwig Guttman believed that engaging in sport was critical to the rehabilitation of people with spinal cord damage. On 29th July 1948, the same day as the Opening Ceremony of the London 1948 Olympic Games, he held the first competition for war veterans at Stoke Mandeville hospital in Buckinghamshire. This was a pivotal moment in history and would eventually evolve into what we now know as the Paralympic Games.

That first event was a roaring success and achieved what Sir Ludwig Guttman had set out to do: to give people with spinal cord injuries the motivation to take part in national events.

Thanks to his revolutionary vision, one of those people would be Margaret Price, a record-breaking Paralympic champion who has recently joined us at Hatherleigh Nursing Home in Okehampton. 41 years after she struck gold at the 1980 Summer Paralympics, Hatherleigh has done the same. We are thrilled to have the legendary sportswoman join the family. 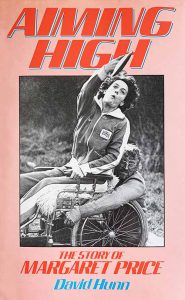 Margaret did not initially strive towards a career in athletics. She had planned to work in healthcare and was training to become a nurse until one day, in 1973, she was tragically struck down by a car as she was walking a zebra crossing.

At just 23 years old and with her whole life ahead of her, Margaret now faced a lifetime of living as a paraplegic woman, completely paralysed from the arms down and partially from the neck. No longer able to complete her nursing training, Margaret had to reconsider her life, her future and what that would be now. Although she did not know it at the time, it would be a future so rewarding that writer David Hunn would one day write an entire book about it called Aiming High: the story of Margaret Price, MBE.

I was recently privileged to speak with Margaret, during which she generously shared parts of her eventful life with me, past and present. She recounted to me how sport became her calling after the accident, and about her journey towards competing at an international level. “I already loved sport before the accident, but not much was known about athletics for people in wheelchairs back in the 70’s. I knew that I could not just sit in a chair and do nothing for the rest of my life. So, I contacted Sir Ludwig Guttman himself, and he invited me to the National Paraplegic games. They were surprised when they saw me because I hadn’t told them the full extent of my disability on the phone. I was worried they wouldn’t let me compete if I told them, but when I got there, I realised it was okay and I began my training.” And so, her journey as an athlete began.

Along this journey, Margaret would visit Lloyds College in 1977 and met the love of her life – Frank. As Margaret described it to me, “We met, and that was it.” The two married and Frank became heavily involved with her training. “I would ask Frank if he wanted to pursue a sport for himself, but he said he was happy supporting me with mine.”

Making it to the Paralympics

With years of diligent training, sheer determination, and now with Frank by her side, Margaret’s newfound focus would eventually lead her to the 1980 Paralympic Games in Arnhem, The Netherlands. Her performance was exceptional throughout. She participated in nine events over two weeks, winning medals in all of them. “Because I was competing in nine events, the late great Cliff Morgan from the BBC asked if they could follow me. Of course, I said yes, not knowing just how well I would do. It made better viewing than any of us could have dreamed.”

She finished with five gold, two silver and two bronzes, making a significant contribution towards Great Britain coming top five on the medals chart. Even more remarkably, this made her the first woman to win gold medals in two separate sports at the event for both swimming and shotput. At the age of 30, Margaret had made Paralympian history.

“I really believe the support I had from Frank is what has kept me going for so long,” she told me. “We were best friends and were married for 28 years, and apart from when I was in hospital, we were together every minute, of every hour, of every day. And every day got better than the last. Love is what kept me going.”

Although Margaret had great support, she still faced barriers placed on her by ignorant others at times. We spoke about the discrimination people with disabilities used to face in those early days of the Paralympics. The 1980 Games that Margaret competed in were only the sixth Summer Paralympic Games ever. It was also the first time the four major impairment groups were united and had their individual international sports federations represented at the same venue. In a BBC interview with Adrian Chiles, she described how certain sponsors avoided her because they believed that using Paralympian goods would send the wrong message to their audience. I asked her how she dealt with discrimination.

‘You need to find the strength to voice your opinions and feelings. If people are uninformed about something, then tell them. No one is ever going to just hand you something. They certainly didn’t in my case. If you really want to do something, then you have to really fight that for yourself. No matter who says you cannot, you have to say, “yes I can.”’

This Is Your Life

Margaret’s unwavering belief in herself and her abilities allowed her to change what could have been a tragedy into triumph. And her talents did not go unnoticed. By order of the British Empire, she was included on the 1981 New Years Honors list for her services to Paraplegic Sport, making her Margaret Price, MBE.

That was also the year she would be surprised by no other than renowned television host and personality, Eamonn Andrews. Believing she was on her way to a sports conference to give a speech, Margaret was instead revealed as the special guest on an episode of ‘This Is Your Life,’ one of BBC’s most popular television shows that aired from 1955-1987.

During the show, which she attended with husband Frank, Margaret was celebrated by family, schoolfriends, and received sentiments from nurses and fellow athletes too. The look on her face throughout said it all, and Margaret was given an evening she would never forget.

Speaking of his time working on the show, Eamonn Andrews said, “It has shown me, more than a lifetime of books could, the achievement and the courage and the sparkle all around us every day of our lives. Apart from throwing new light on the famous, it clearly demonstrated that many little people have big, inspiring stories.” Reading his quote, I couldn’t help but think of Hatherleigh. A nursing home that not only recognises but celebrates each of the unique personalities you will find within it. It is a place filled with extraordinary people, with extraordinary life histories.

Today, a lifetime away from the Netherlands, Margaret has been settling in as a new family member of the home that resides in East Devon. Soon she will be returning to her own home, to continue living the life of independence her determination has always allowed her to live. Speaking of her stay at Hatherleigh she said, “I have to say, out of the 3 or 4 homes that I’ve been in, this one is the best. There seems to be a completely different relationship between the carer’s and those of us who live here than I’ve experienced anywhere else. I can’t quite explain, but there’s something special about Hatherleigh and the people here.” And there is a good reason for that.

Sir Ludwig Guttman was a revolutionary thinker with an ambitious vision. His philosophy that all people in his care could live full and rewarding lives aligns a lot with Hatherleigh’s own ethos. Here we strive to create a continuation of home for all of those who live with us; supporting independence and encouraging personal enjoyments and occupations that make lives fulfilling.

As Margaret’s time with us comes to an end, she leaves us with this thought, “next month it will be 48 years since the accident. That is a long time for your body not to be working properly. I know the disability is taking over my body, but there are things you can do every day to keep yourself going. I’ve always been good at doing that, and it’s what I’ll continue to do.”

This is your life, Margaret Price.