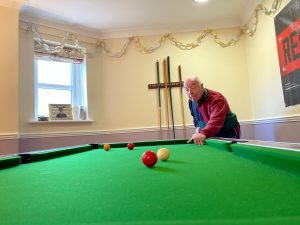 Camaraderie is something we usually associate with workplaces, sports clubs, or the military. It is the trust between a group of individuals who are usually uniting to experience something together.

So, what about camaraderie in your home?

At Gibraltar Nursing Home, there is a community of gentlemen who are all neighbours. Living along one street, they have an environment that reflects the realities of their lives.

Two former soldiers gather around a collection of military memorabilia. They are often found reminiscing about times spent in service of their country and training in their regiments. Common experiences they share, and memories they can hark back to.

In the middle of the street, there is a pool table and darts board. Regularly you can hear the potting of balls and the thudding of darts against the board.

These are happy sounds, sharing in moments from the ‘good old days’ spent in clubs, pubs and in the army mess. 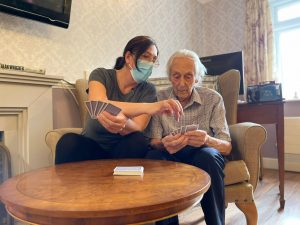 Bridget Ioannides is the house leader for this community, which is otherwise known as Meadow Street. She has witnessed incredible transformations in the wellbeing of some of the people living there through occupation.

“The pool table has helped one gent, who has had a hip replacement. Within two weeks I cannot believe the natural physiotherapy that has happened. Without even realising it, he has started playing pool with Craig [Gibraltar team member] and he’s making a remarkable recovery without even realising it! Because it is something he enjoys doing, he is having natural physiotherapy without realising. He doesn’t even use a steady anymore. It is just phenomenal how well he’s doing,” Bridget said.

Alongside the pool table and dart board, dominoes, scrabble, cards, hoop-la and noughts and crosses are often played in the living room. In the evening you will often find sport or a film on the television. It’s not all games and sport though for these are also men of culture. Last weekend, there was a ‘cheeses of the world’ tasting session.

“We have a huge map of the world in the dining room. I have printed out small facts on certain cheese with pictures to match. They will be pinned on the map and we tasted each cheese with a glass of port!” Bridget explained. 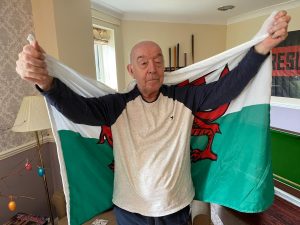 The cheese plan sparked an idea within the community and a cider tasting session is also being planned at the request of the people living on the street. The street also has window boxes for growing vegetables and the community meet together to decide what vegetables and fruit they want to grow.

These social opportunities and occupations led by the people who live at the home is having a hugely positive impact on each individual person. The community sharing in mealtime experiences together as a household has seen dietary improvements.

“Appetite has definitely improved, especially for one gentleman who chose not to sit and eat at the table. He now sits opposite a friend and takes his ques from him, causing him to stay at the table longer and enjoy his meal,” Bridget shared.

Alongside the physical benefits, the newfound trust built in the community has supported a greater understanding between each person living on the street.

“Even the quieter men have also opened up to me and I’ve learnt so much about their lifestyles pre-Gibraltar. It’s important the people we care for always feel valued and part of the family at Meadow. You strike a chord with them and you will talk constantly!” Bridget explained.

There is a desire at Gibraltar, as part of the Evolve Care ethos, to enrich and fulfil the lives of the people living on Meadow Street in a way that is representative of the people who live there.

“We’re trying to keep that normal sort of identity of the outside world at Gibraltar to prevent any institutionalised feeling. It is normal life here.” She continued. “Even when I’m not at the home, I’m always thinking of how I can better their lives when I go back to Gibraltar.” 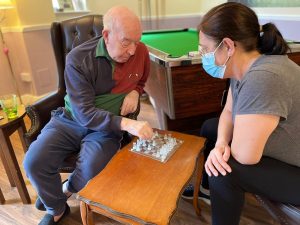 Bridget and the team who support the Meadow Street in Gibraltar Nursing Home have supported group of people to become a thriving sociable community. They have seen improvements in the community’s member’s wellbeing both holistically and physically, much to their continuing delight.

It is a house of gentlemen. Together they continue on life’s journey, supporting each other in their pastimes, previous occupations and happy memories. It’s the camaraderie and togetherness that makes this house in Gibraltar, a home.