A Bard’s View on Dementia 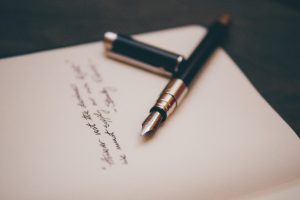 April is Poetry Month, at least in the USA. Over here we tend to join in but maintain our British feeling of literary superiority because our lists of poems and famous poets is much longer than those of our American cousins and I’m pretty sure that most of us can quote a line or two from Wordsworth. Poetry is designed to make the beauty of words visible and I had recently come across some poems written by a senior governance nurse, Karen Tidy, that focus not on daffodils or clouds, but dementia care.  A subject that is not the most obvious to write verses about.

Karen is at the centre of Evolve Care Group and supports 6 care and nursing homes, and I thought her poems offered a fascinating insight into the world of dementia care.  As a senior governance nurse her work involves supporting everyone within all the homes to maintain their best physical and emotional well-being.

The individuals that Karen supports at Evolve Care Group are always referred to as family members and some happen to live with dementia which is a difficult condition that gradually erodes all the nuances and subtleties that make you who you are. The home uses a “Household Model of Care” which aims to create a true continuation of home life and means that choice and remaining independent for as long as possible is at the forefront of everything they do.

I was interested discovering how such a dark subject could inspire Karen and ask, in this age of watching movies on our phones and being able to get our gas supplied by our electricity company, is there is still a place for writing poetry in the 21st Century?

When I met Karen, I noted that she had kind, smiling eyes and a shy disposition. Within seconds of me asking how she got into caring, she told me how her father had passed away when she was just ten, she immediately embraced the role of caring for her siblings which made the move into professional caring a logical and natural step for her as soon as she was old enough.  She talked passionately about how much she loves what she does and being in the homes, helping people is second nature to her.  She says that knowing that she is making a real difference keeps her going.

Her love of poetry comes purely from her emotions and the words seem to simply pop into her head, prompted by what she sees, feels or hears. She finds it hard to write planned poetry, much preferring to write rhyming lines spontaneously.  I was busy scrawling my notes trying to keep up with her when she said something that struck me as poignant.

She explained that a few years ago, she had been on a specialist course that taught end of life care and said that seeing people confined to their beds who were unable to verbalise got her wondering what they were thinking and feeling. She says it is imperative that the people she cares for are still spoken to and included in discussions. As soon as you stop doing that, she explained, the person becomes part of a conveyer belt system, on their way to their end.

She also became acutely aware of how hard it must be for them to lie in bed and hear laughter from passers-by in the hallways outside.

She concluded by saying that caring is like music. A silent music, and the most important thing for a carer is to have a big heart. I knew at that point that we need more carers like Karen, who give a new meaning to the term nursing care. And in case you’re wondering, yes, there is a place for poetry in the 21st Century.

The level of care and support that we give,

Dictates the standard of life that they live.

Time and attention, and a listening ear

Will dictate a plan of care that is clear.

Likes and dislikes, one sugar or two,

Walk with a Zimmer, with slippers or shoes.

A bath or a shower, which they like best,

A bra, a T-shirt or old stringy vest.

To eat at the table, with a spoon or a fork,

To sit there in silence or choosing to talk.

Oh, please give me choices,

I know I can’t speak

Then show me a picture of what I may eat.

Wearing my night wear on top of my clothes,

Or my makeup all smudgy right over my nose.

Does this really matter? At least I have tried,

And managed to maintain independence and pride.

When I go to the toilet, please give me a chance,

Don’t stand there and hold me, then pull down my pants.

You make me feel frightened, you fill me with fright,

Then I just react with a kick and a fight,

And then I am labelled – it’s not really my fault

It’s a natural response to a downright assault.