Gibraltar Nursing Home: Brindley Walters, “An Inspiration to our Countries’ Young People and to Europe” 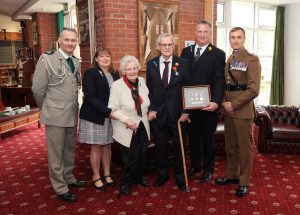 A Man of Commitment, Gallantry and Spirit

Remembrance Day is an opportunity for the country to unite and honour those who sacrificed themselves to secure our freedom. Gibraltar Nursing Home is home to one former Welsh Guard whose wartime achievement and bravery has seen him receive international honour.

Brindley Walters, a D-Day Veteran, was proudly selected by the French President to be awarded the highest French military accolade for his dedication and determination during World War II.

Brin, as he is lovingly known, was awarded the Legion d’Honneur for his contributions to the allied effort on D-Day and the role he played in the subsequent Liberation of France.

Colonel Armel Dirou addressed Brindley while presenting the prestigious award at the Lucknow Barracks in Tidworth. He declared: “We owe our freedom and security largely to your dedication and determination, for which you were ready to risk your life. You are an inspiration to our countries’ young people and to Europe. Thank you for what you did alongside all your brothers-in-arms. May your commitment, gallantry and spirit of fraternity continue to serve as an example and inspiration to us all.”

A Welsh Guard far from Home

Brindley Walters was born on the 18th of March, in 1922 and raised in local Llandevenny, where he was the youngest of 11 children.

He began his military service in 1943 aged 21 and was based in Kent whilst training in preparation for deployment with the Welsh Guards. He prepared as a gunner mechanic, working on Britain’s Cromwell tanks in preparation for what was to be the largest seaborne invasion in history.

On the 6th of June, 1944 the Allied forces began landing in Normandy in the historic D-Day landings, in which 156,000 troops made the treacherous journey to the French coast. Troops continued to land on the beaches in the following days, each day from the 6th of June was known as D+ the amount of days from the initial landing. By 11th of June (D+5) 326,547 soldiers and 54,186 military vehicles had landed on the beaches, one of those soldiers thrown into the most testing of conditions was Brin.

On Thursday 8th June, D+2, Brindley landed at Arromanches surrounded by terror raining down as the Nazi forces attempt to repel the allied forces from successfully landing. The forces managed to establish the temporary harbour known as ‘Mulberry B’ which enabled the rapid offloading of cargo onto the beaches.

Brindley and the Welsh Guards fought east towards Belgium, where Brindley was severely wounded in 1945.

Having returned home, Brindley married his love Sheila, having met at dances in the village halls to raise funds for those in the armed forces. 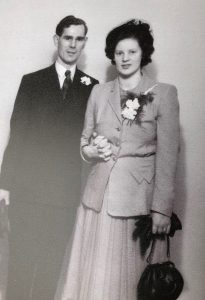 The couple were married in a small service at the local registry office; the two of them accompanied by their two best friends who served as witnesses to the service. War time marriage was an understate affair for most couples tying the knot, with many friends away fighting, food rationing and metals used for jewellery scarce.

Rather unsurprisingly, having been the youngest of 11, family has always been an important part of life for Brin. His daughter Helen explains where her father was in his element.

“He was a quiet man who never wanted to travel far and was happiest surrounded by his family and pottering in the garden.” She said.

On the 13th of December 2018, the French President nominated Brin for Legion d’Honneur, the highest distinction, and honours exceptional acts of gallantry and devotion by those who have served France.

Brin now lives at Gibraltar Nursing Home alongside his beautiful wife of almost 70 years, Sheila. Family continues to be a big part of their lives; they invited many of their loved ones into their own lounge within the home to celebrate their 69th wedding anniversary last year. As they socialised together, proudly displayed above them were images of the day in Tidworth that brought the family so much pride and joy.

Having never shared his war time experiences with his daughters Helen and Julie before, Brin’s humility is striking having shown such bravery in the face of truly horrifying adversity. Brin remains an inspiration to us all.

This Remembrance Day, we pay tribute to all those who have fallen for our freedom. Lest We Forget. 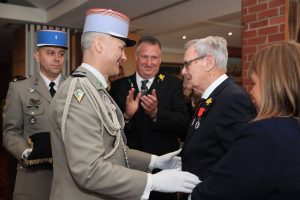