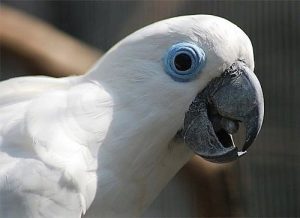 There is a very unusual character currently living at Frome Nursing Home, so writer, Jerry Short, decided to pay a visit to find out more.

He said, “Anyone entering one of the upstairs lounges at the 60-bed home would be greeted with a cheerful “Hello,” except at night time, when the voice’s owner would be inside a cage, covered with a sheet. Don’t be concerned though, it belongs to Rio, a Blue-Eyed Cockatoo, a type of parrot belonging to Wendy Potts, who has lived at the home since August 2018.

“I loved the fact that the home treats everyone as if they are one big family, never referring to them as residents, but as family members.”

Jerry knew that for the elderly, just being around a pet can have a soothing effect and spending time with an animal can brighten anyone’s mood.

He went on, “Unfortunately, Wendy developed mobility difficulties, so Rio’s cage was moved from her room to a nearby lounge where the cockatoo was easier to look after, and she quickly became a firm favourite with the rest of the home’s 59 family members.

“I walked through the home at lunchtime, and delicious smells were wafting from the kitchen. Last year their head chef had been invited to an awards ceremony in Parliament for vegetarian cooking, so I knew the food would be good, but I had an appointment with a parrot to keep. In one of the lounges I was formerly introduced to Rio who was an inquisitive and intelligent bird.  Parrots are androgynous and as nobody seemed to know her sex, so I decided for the sake of this article, to refer to her as part of the feminine gender.

Rio cocked her head, before climbing the bars of her cage to get a better look at me. I’d been told she loved copying movements. The nearest family member, Wendy Mills, encouraged me to bob my head to see if I could get a response. Feeling a bit awkward, I did as asked and I must have grinned like a Cheshire cat when Rio copied my head bobbing and even raised an impressive crest of feathers. We were both nodding our heads at each other like heavy metal fans, dancing. This was genuine animal communication, just without Attenborough’s voice over.

Feeling more like one of those nodding toy dogs than a metal fan, I asked Wendy how popular Rio had become. She told me she was attracting family members who did not usually frequent that lounge, hoping to catch Rio dance when anyone played the piano. It turned out that 84yr-old Wendy, was a former pilot and I joked that she and Rio probably got on so well as they both knew how to fly.

I had been told that Rio had an extensive vocabulary but try as I might, I couldn’t initiate any form of conversation with her. That was until I turned to chat with Wendy. I couldn’t be sure, but I could have sworn I heard a single word: “idiot,” uttered quietly in a distinctly avian voice.

Talking to and playing with Rio has been a welcome addition to the home. The interaction between human and non-human animals fascinates us all. It even has a name – anthrozoology, and animal therapies are a centuries-old treatment approach.

Two thirds of the Frome home live with dementia which is condition that can have a profound effect on communication. The home knows that despite this, the creative, imaginative and emotional parts of a person can still remain strong, so they encourage everyone living there to keep occupied, not just with Rio, but with creative practices such as music, painting, reading and games. Family members are given as much control over their lives as possible. For example, they can choose to eat with friends in small “family type” kitchens, or in their own rooms. The home also encourages family members to make their own hot drinks or snacks whenever they want. Having this control makes it feel like a real home.

Having contact with an animal, whether it has fur or feathers, can lower a person’s blood pressure and heart rate, and provide companionship and affection, which are important emotional needs.

Rio helps promote well-being in the home, and the cost of all this animal therapy?  Well, just peanuts really.