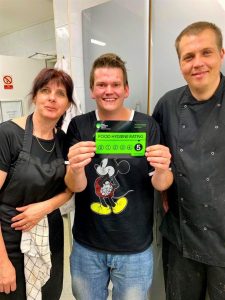 Frome Nursing Home was awarded the maximum five stars again, in the latest food hygiene rating by the Food Standards Agency, for the tenth year in a row. Head Chef at Frome, Ben Kerslake, is also celebrating 12 years of working in the kitchens at the home, having started as a kitchen assistant back in 2007.

Ben and his team wowed food inspectors from Mendip council, who left well assured that the services were the highest possible and hygiene was always maximised. They focused on the handling and storage of food, the cleanliness and layout of the buildings and the recording of food information.

Maggie Rhodes, Home Manager, was bursting with pride when she told us: “Achieving 5-stars for the tenth time is an astonishing achievement and testament to the hard work of Ben and his team. They ensure that everyone living with us has a choice of food which is always nutritious, well-presented and results in always dining with dignity.”

Over the years, Ben’s passion has helped him achieve numerous awards and climb the kitchen ranks to the coveted Head Chef position. Every day they cook the most nutritious and tasty vegetarian and meat based meals they can. Their vegetarian recipes were even recognised at Westminster last year, when Ben was named by the charity, Vegetarian For Life, as runner-up in the 2018 Awards for Excellence in Vegetarian and Vegan Care Catering, held in the Houses of Parliament.

Speaking at the Frome home, Ben said: “I love working here and having the best team around me is half the battle won. When preparing the menus, we understand everyone’s tastes and nutritional needs. On today’s menu is veggie bolognaise with pasta, or meatballs with a tomato sauce. We cook daily for around 70 people and have almost zero waste as we recreate another tasty dish with leftovers and peelings either go to make stock or go to the compost bin.

Maggie and the team at Frome Nursing Home have thanked Ben for his years of brilliant work and look forward to many more 5-star meals.