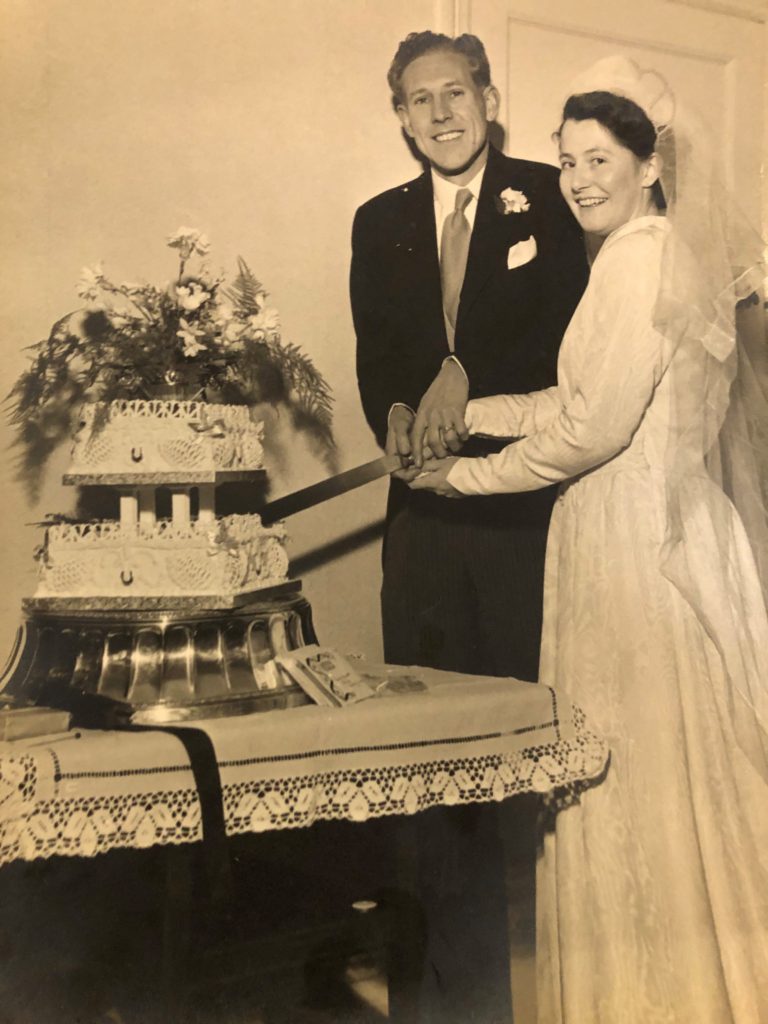 Peter and Glenys Hackett have lived together at Gibraltar Nursing Home for over two years. Valentine’s Days are more special for them than most, as every year they celebrate their wedding anniversary. This year will mark 67 years of their loving union.

I join them at Gibraltar Nursing Home, where they share not only a double room but their own independent lounge. Their lounge is both homely and welcoming, with photos of the couple and their children positioned proudly around the room.

Interrupting their mid-morning television, I join them for a cuppa – Glenys urges me to turn the TV down, keen to talk about their lives spent together.

Peter and Glenys first became acquainted at a young person’s bible school in London at Emmanuel Church, Northwood. When I ask about the day that led to their 67 years of marriage, the proposal, Glenys tells me, “It was at home, and I said yes immediately!”

They married where their love story first began, at the Emmanuel Church in 1953. In some cultures, rain on your wedding day is considered good luck, symbolizing fertility and cleansing. Even so, most people would prefer to avoid drizzle on the day of their nuptials. Unfortunately for Glenys, the weather that day is the first memory of their wedding day that comes to mind, “It was raining” Glenys responds when I ask.

At the time of their marriage Peter had been working as a lecturer of African languages. In 1958, he moved profession to become a vicar. The couple moved out of London, moving from parish to parish throughout the Midlands and South West.

Peter and Glenys are the proud parents of seven children, two of which were birth children and five of whom were adopted. I ask, seven children? chaos? “No!” Glenys replies, “well-behaved on the whole.” Peter affirms, that their children were, “very well behaved.” This was an expectation of the offspring of any vicar – “misbehaving children did not reflect well on any vicarage family” their daughter Ginny tells me.

While I sit with the couple, team leader Tina enters the couples lounge to see what all the laughter was about. She puts the trouser wearing question to the pair of them as she asks, “who’s the boss?” Glenys looks at Peter, “he’s the boss” she says. Peter is asked the same question, and says he feels “neither of them are the boss”.

Later, following conversations with Tina and their daughter Ginny, I am told to take this admission with a pinch of salt. As upon Glenys’ retirement from teaching, Peter made her breakfast in bed every day without fail! An opportunity Peter would use to sneak a quiet few minutes downstairs for a good read of the paper.

Asking Peter, more generally what he thought about marriage, his response comically was, “Don’t do it, don’t do it!” with a grin and a soft chuckle. Glenys responds by shooting a piercing look across the room. I asked what they’d hoped for, onwards from their wedding day? “To stay married,” and the pair add, that they “hope to continue staying married for much longer”.

I ask Glenys what’s most important in a marriage and she says, “being loved”. 67 years – that must be love? I respond, Glenys doesn’t need to say a word, the beaming smile says everything you need to know.

As I type my notes in Gibraltar’s library, I reflect upon my morning spent with the Hacketts; the longevity of their obvious love for each other, and the magic that emanates from the pair of them when they discuss their years spent together. To find the same abounds of affection, love and romanticism that Peter and Glenys have been so blessed to find in each other, is surely what we all hope for in any blossoming relationship.